The job market for PhDs, especially in the Humanities, is not good. My advisor told me it was the worst she’d ever seen…and that was several years ago when I first begin my PhD studies. My own professional association, the History of Science Society, has made a concerted effort to identify jobs outside of academia for graduates and, importantly, to promote those positions as “not failures.” Further, a number of books and articles have advocated for alternative careers  for PhDs (a recent example is discussed here) while others rightly bemoan the state of the business-model university.

However, we should not lose sight of the larger picture. Income inequity for everyone has grown enormously over the past four decades. The financial crash of 2008 has further battered our economy. Job prospects are not just bad for academics; they are discouraging for everyone. So the push to value other careers – which could translate to other low paying, unstable jobs as an alternative to the low pay and tenuous employment status of adjuncts – seems misguided. My sense is that most PhDs would be happy to use their skills in other settings if they were compensated at a decent rate and with reasonable job security.

But we still need good professors. In the stories that followed the defeat of the Harvard debating team by the Bard College-trained debate team from the Eastern New York prison, the expertise of the professors who worked with them did not receive nearly as much press as the fact that the Bard students in prison had to study with restricted access to materials and no use of the internet. Indeed, the work ethic of the students and their intellectual aptitude deserves to be celebrated. Nevertheless, it is also worth recognizing the key role that professors played in preparing these students to think clearly and argue effectively.

It is a real loss when a retiring professor is not replaced in favor of doubling the class size or employing less expensive (i.e. “contingent”) faculty. This has become an accepted scenario in the current climate of higher education. It is not just jobs that are at stake. Employment shapes our daily lives in important ways: as a source of income and sense of achievement and community. The loss of tenured positions, which in secondary education has meant tenable positions, is a real loss for new PhDs and the work force at large.

But we should also keep in sight what is lost in the bigger picture when that not-replaced professor is not there. The future world with its increasingly-global-scale complexity needs people who are thoughtful, energized, and well-educated. Professors challenge, support, and prepare those kinds of people. Education is not a collection of facts but an engagement of mind and body, a traversing of what is known and not-yet-understood. Professors serve as skilled guides and seasoned fellow travelers.

The current dearth of decent jobs in academia should not make us lose sight of what universities have achieved nor of what role they could play in the future. Equal opportunities in education have been in many ways America’s great promise. We live in the best of times and the worst of times – a time when our universities still are among the most excellent institutions of higher learning in the world, and a time when those institutions are under the most virulent attack.

The recent success of the Bard college prison debate team has made visible persistent racism and a U.S. prison industry that has grown exponentially over the same decades that have seen the sharp decline in academic positions. The United States with only 5% of the world’s population incarcerates nearly 25% of the world’s prisoners. Instead of funding one of the world’s largest prison systems, we could do a better job of funding higher education. The success of the Bard college debate team could be a catalyst for more deeply appreciating what professors do and for not giving up on the professorial vocation without a fight.

The replacement jar for my now-apparently-vintage Hamilton Beach blender arrived this past weekend from eBay. A blank label under the inventory label, carefully obscured the data on origins which proclaimed that the replacement jar was “Quality Constructed in China.” It came complete with two tiny insects squished and preserved on the rubber gasket, a lid of dubious quality plastic and a rotating blade of creaky construction.

This is not a complaint (the glass jar will work fine) so much as a comment on how much has changed since eBay first appeared as a venue for selling and buying gently-used genuinely second-hand things. Much of the clothing and household items now sold at thrift stores such as Goodwill are of such low quality that they probably should not have been made in the first place. My sense is that it is much more difficult for students, artists, and young people starting out or older ones living on a limited pension to stretch their dollars in a reasonable way. Being able to buy well-made things – even if they are second-hand – imparts a certain dignity to one’s daily life.

I do love things that truly are quality material objects, such as the handsome table and bench set that my father-in-law made for us when we were living in our first home – a 1930s craftsman bungalow with a thirty-inch wide and seven-foot-long counter made of old-growth Douglas-fir in the kitchen and French doors looking out on an enclosed back porch across the entire width of the house. We were not able to take our lovely Highland Drive home with us on our many adventures since then, but the bench and table set – with its Douglas-fir inlay back and maple trim – has come with us and we’ve found the perfect niche for it in nearly every house to which we’ve moved. 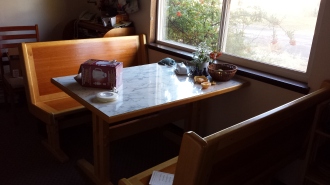 I’m sometimes working at this very table as I am writing my version of The Great American Dissertation. You can find out more about my research on things material and ephemeral in eighteenth-century France here.