In a circa 1580 manuscript of handwritten recipes, an anonymous experimenter in Toulouse gives instructions for making artificial coral. This recipe says to mix one pound of molten pine resin with one ounce of finely ground vermilion (red pigment) together with an unspecified amount of walnut oil and – to make the color even more vivid – adding a bit of “lake pigment” from Venice (an organic dye isolated through a chemical process). In the margin, the author has written copious notes detailing the best way to make the clearest, purest, hardest resin. The recipe cautions the would-be coral maker to melt the resin over a charcoal fire, not over an open flame. This was to keep the concoction from bursting into flames. Into the hot mixture, one would swirl a branch of wood or thorns in bizarre shapes, smoothing off any imperfections over the hot coals, resulting in a brilliant red sprig of fake coral. 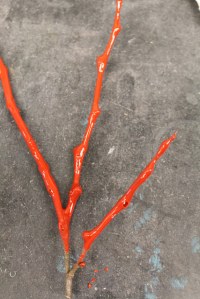 But why artificial coral? What did the early artisan/writer who recorded this recipe over four hundred years ago have in mind when he gave these instructions for making a material that could be found in nature?

We can find a clue in a book of emblems published a few decades later by the physician and alchemist Michael Maier (1568-1622). In emblem books such Maier’s De Secretis Nature [Of the Secrets of Nature], aphorisms and allegories imparted moral lessons or explored hidden secrets of the material and spiritual world. Making coral, like making gold, was a worthy alchemical goal. In De Secretis Nature, coral is likened to the Philosopher’s stone:

For as Coral grows in the Waters and draws Nutriment from the Earth, so also the Philosophick Stone is concreted out of Mercurial water and has taken from it whatever is worthy in it towards its own Augmentation, the Superfluous Moisture having expired.

Maier speculates that coral, being mysteriously produced underwater and only hardened in the air, could be animal, vegetable, and mineral all at once. He comments on the difficulty of gathering coral and includes an image of a coral fisherman, carefully drawing some branches of coral with a long-handled tool. Coral in the seventeenth century was valued not only for its bright red color but also for its medicinal qualities. Fake coral then could be considered an early synthetic pharmaceutical. 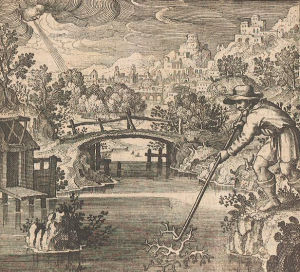 In our own time, scientists have developed a number of medicines derived either from coral or the marine habitats they promote. Coral is also used to make cement and build roads in throughout Southeast Asia, off the east coast of Africa and in the Pacific. It is used in calcium supplements, for jewelry, and in aquariums. In addition, coral reefs serve as habitat for an estimated twenty-five percent of fish eaten by humans.

Concern about damage to coral reefs from ocean warming and acidification has prompted the manufacture of artificial coral with an interesting twist. To fund the replacement of coral reef habitat that has been damaged, entrepreneurs have offered to encase the ashes of a departed love one in reef structures for a burial at sea (http://eternalreefs.com/). These grey cement modules of artificial coral are more functional than artistic—and they have had some success in being adopted by sea plants and fish. They also appeal to the enigmatic connection between life and death, natural and artificial, though they lack the attention to the vibrant red color that was so important to an early experimenter who made imitation coral from pine resin. 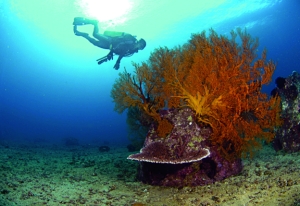